After a first selection as finalists were Outloudz and Getter Jaani finally the public has chosen the song of Getter Jaani “Rockefeller street” to represent Estonia in the Eurovision Song Contest 2011. The talent and career of Sven Lõhmus decision made public by the song of Getter. The jury did not help the classification of Getter for the final but the public vote put her in one of two finalists. Ithaka and Rolf  had no good luck with either the jury or the public. I think these songs would have been perfectly represent Estonia in Germany, but  Sven Lõhmus leave with dignity represent the position of Estonia in the festival… remember that this pep1000 channel  has caused since I discovered Sven and your job… More and more people in Europe know their songs…  Bravo Getter, new Estonian talent!

Clearly this year is much higher level than last year and many artists can win this contest. Ithaka Maria has a song with great force, ideal for these festivals, so do Getter Jaani, a lively song, Jana Kask and Rolf Roosalu have a great melodic songs, the beauty of Victoria with a great pop song… but Pep1000 is decided by Rolf: It takes many years trying to represent their country at Eurovision and I think it will do very well!. A beautiful song and a good artist have come together this time, and we can not forget the beautiful lyrics of Liis Lass. Rolf I wish you good luck for this Saturday!!

Videos of the yesterday show!

After the sudden elimination of the song performed by Uku Suviste, tonight we have seen 9 songs instead of 10. Sorted songs correspond to 2 of my choice: Ithaka Maria and Rolf Roosalu, the two essential songs for the final and MID, Mimicry and Orelipoiss. I honestly had changed Mimicry and Orelipoiss for Sofia Rubina and Tiiu Kiik… Tiiu Kiik’s song “Second chance” this year was much better than last year presented.

Finally we have a good final for next Saturday… perhaps the song that does not deserve to be there is “Valss” by Orelipoiss… with this kind of songs Estonia will do nothing good in Germany!.

This coming Saturday… The second semifinal… I think clearly classified Ithaka Maria and Rolf Junior. Rolf has a slow and emotional song and Ithaka has made a great song very energetic and appropriate for these festivals… I decided by Rolf… 4 years ago trying to represent your country and is a good artist… There are other artists as Uku Suviste that appeal to women, Sofia Rubina with extensive professional experience… Definitely this year there is much more artistic level and I choose to Rolf and Ithaka: the other three representatives to let them free choice!

we have more videos from yesterday! Victoria’s super hit!

We have the first semifinal of Eesti Laul 2011:

Pep1000 been fully successful with 3 artists: Victoria, Getter Jaani & Jana Kask.!! I am very happy with the level of this year … the level of songs has been much higher than last year’s festival. I’m happy…  although sometimes the internet connection was not right. They have also moved into the final “Noorkuu” and “Outloudz “… It was a very exciting first semi-final … Soon put the videos!

We further found the festival by the ETV website… Great!

This Saturday is the first semifinal of the competition (21.35 h Estonian time). We further found the festival by the ETV website… Great!

In the first semifinal would clearly be classified Victoria, Getter Jaani and Jana Kask… but sometimes not always right in my predictions … The Victoria and Geeter songs are for me much better than the other… but the Jana’s song is already well known in Estonia… we wait and see what happens!.

The show, hosted by our favorite artists Piret Järvis and Lenna Kuurmaa two specialists in these types of festivals… 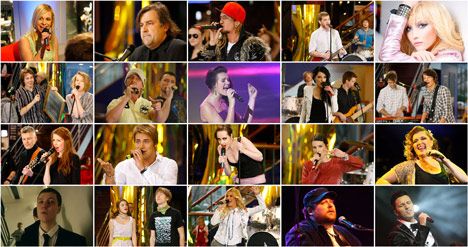 We finally have the last song contest this year of a famous artist … Ithaka Maria has made a happy song, energetic and interesting chorus for Eurovision … and with the great idea to accompany the promotion of the song with a nice video in which she looks very sexy and see the video is nice … Is now Ithaka Maria a rival for Rolf Junior?…. I think that… YES!. In these contests all influence, clearly a good promotion of the song will be definitive for assessment of the public …. Rolf perhaps should have made a small video for the song … https://pep1000.wordpress.com/about/ithaka-maria/

Finally today the producer “Moonwalk” on working Sven Lohmus has published the song “Rockefeller street” of Getter Jaani, the song that had to compete with Rolf Junior’s song to win the contest this year … On this occasion, in my opinion, the song will be not a great success as in the past that Sven was at the festival… wait to know what you think the public in the contest!

Victoria’s song is good, very appropriate for this kind of festivals and it is accompanied by a good video clip like that of Ithaka. Well for me it is a song of good candidates to win the contest!. Very good Victoria!!!!

Here you have a good sample of songs that have gone through the competition between the years 2000-2010 … I hope that the level increases as these songs!

On the official website of Eesti Laul on ETV and you can hear some fragment of the songs …. not yet available Sven Lohmus song (Getter Jaani), Uku Suviste, Ithaka Maria ….. in principle should be the majors competitors of Rolf.

The artistic level does not seem too high … I do not understand! … with the great artists in Estonia!!. Mimicry’s song has improved somewhat over the track last year but it isn’t a winning song, Elmayonesa is a very bad song … the moment a song is worthy enough to Victoria “Baby had you” compared with the others ….

We have more new songs concerning disqualified for the final: This time is the song “Ilusad inimesed” performed by Laika Virgin feat. Fredy Schmidt  because was published before September 1st and therefore did not meet the Eurovision rules. They have been replaced by Meister ja Mari and the song “Unemati”.

Already have the first songs and first videos. Rolf is located between the early favorites to win the contest. Good duo, interesting song with nice melody and stunning final, Liis Lass’s emotional lyrics -a songwriter who often works with Rolf-…. good job Rolf!.
https://pep1000.wordpress.com/about/rolf-junior/
See Liis Lass web, lyricist and artist management: http://www.liislass.ee/
Jana Kask has a beautiful voice… the song is very soft with a strong command of the piano and very romantic, perhaps it is not appropriate for this type of festival… although is a good song!. It has been two months since the video was on Youtube… Was this allowed?

And begin the first controversies in the competition this year: Janne Saar’s song “Meeting the wolf” has been eliminated from the competition because, according to the organization, had a version of this song in September on the Internet. To replace this song has selected artist Tiiu Kiik which last year had already been selected for the final with a horrible song. Now is the time to start to hear the songs but the level is beginning to fall … I hope that eventually the musical level is not similar to last year!.  I hope this does not affect Janne, a great artist you are looking for international recognition.
http://www.ohtuleht.ee/index.aspx?id=407438
Janne Saar talks about her song and the elimination of competition on “Ringvaade”on ETV (12/17/2010)

Once the deadline for nominations, this is the selection of twenty finalists made by the jury of the 140 songs submitted (15 less than last year). We appreciate diversity of musical styles.

In a first quick reading, we can see in this selection of veteran artists earlier editions of “Eesti Laul” as Rolf Junior, Ithaka Maria or Janne Saar, established artists as Uku Suviste or Sofia Rubina or Sven Lõhmus’s new muse, Getter Jaani. In principle is a higher level than the previous edition … Now we have to go listen to the songs!.
Each of the two semifinals of Eesti Laul 2011 will feature 10 songs, proceeding to the final 5 of them. This result will be decided by a mixture of jury vote and televote at a 50/50 split. Therefore, 10 songs will reach the final battle to represent Estonia in the Eurovision Song Contest 2011. The winner and thus Estonian representative will be decided by 100% televote.

Already have some of the songs prefinaliter of Eesti Laul 2011. Will be analyzed in detail!!.

Here is the link to information: http://www.hot.ee/eestilaul2011/

“As the interests for the event has risen, then we’ve made some changes,” the Executive Producer of Eesti Laul, Heidy Purga, said. “A jury will pick a total of 20 songs this time from the submitted entries, instead of ten and thus, we’ll have two semi-finals.”

From both semi-finals, five will qualify for the final. A voting system similar to last years’ editions will be used where the first round of voting will be between a jury and viewers, who will first determine the lucky ones to qualify for the final and in the final, the same combination will pick two favourites. The winner of the two so-called super-finalists will be decided by a televote.

The deadline for submitting songs to Eesti Laul is the 17th of December.

Estonia is already working on the “Eesti Laul 2011” to send its representative to Eurovision to be held this year in Germany. This year, unlike previous select 20 songs, and there will be two semifinals, 12 and 19 February and one final on February 26 where they will choose 1 song selected two previous days. At a minimum this year is guaranteed a good show with two semifinals and one final.

After the failure of the previous year, hopefully the jury and the public choose a good finalists!.

More information about the 20 finalists will find it here (in Eesti keele!)