We can classify Lenna Kuurmaa (1985) as the most powerful voice of Estonia. She forms a part at present of the most international band of Estonia, Vanilla Ninja, but also she practises in solitarily of actress, songwriter, presenter or artist in different types of musicals like “Charly Brown”, “Kuniga ja mina” or “Sound of Music” (please to see page Vanilla Ninja in this channel) https://pep1000.wordpress.com/about/vanilla-ninja/

She interpreted to Maya in the strange movie “Kuhu põgenevad hinged” of which also there sang the sonorous original soundtrack “Saatus naerdes homse toob” song of rock with a strong and risky melody but that Lenna interprets perfectly. 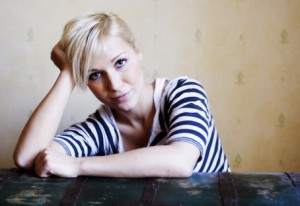 Lenna is characterized for being a polyvalent artist: from a hard singer of rock for example in the song “Blue Tattoo”, or romantic sad song like “Silence” or ethnographic “Helletus” with the band Vagilased, or songs of style Gospel. In 2007, she was chosen by the audience of Raadio 2 to be a singer in the Unistuste Bänd, a group composed of popular Estonian musicians for a one-time performance at Raadio 2 Hit of the Year award gala.

I believe that some day will realize Lenna’s international projection. The future in Europe is imminent. To her they exceed qualities her.

11 january 2010. There has just be known the news that was waiting!. Lenna has been selected by the final of the “Eesti laul 2010” of March 12. If she was winning Lenna would be going to represent to Eurovision in Osol for Estonia. Will this news be Lenna’s world projection that I had announced?

12 march 2010. Already we know the result of the Eesti laul 2010. Lenna has stayed in 2 place… Her world reputation is waiting for a next occasion!!

Summer 2010: Her first solo album is in stores now!. The album is called “Lenna” released by Mortimer Snerd and surprisingly the overall style of the first album is soft, very different from the rock to which we are accustomed to seeing Lenna in Vanilla Ninja. All the songs were written together with and produced by Vaiko Eplik. We can find 10 new songs except for “Rapunzel” presented in “Eesti Laul” this year being in second position.

Actress of theatre, musical, presenter of TV, model… many are the tasks of this versatile artist. Let’s expect to see many successes of her in a nearby future!.